John Copping was born in Toronto in 1964. But a life-long fixation on synthesizers didn't take root for another 12 years, when he bought his first record—Kraftwerk’s “Autobahn."

An early student of the searing lesson that Synthesisers Are Expensive, John taught himself to play the affordable instruments: guitar, bass, drums, accordion and the upright piano in his parents’ basement. He was fronting bands at 17, going to school by day and lying about his age to play dive bars at night.

In the 1990s, John—by all accounts a gifted songwriter—signed a publishing deal with EMI Canada and made himself indispensable to the Toronto “Pure Pop” scene, sharing stages with famous-er names like Ron Sexsmith and Rufus Wainwright. He moonlighted as a film-and-television composer and string arranger and, in 1998, returned to his roots with a self-released, self-produced CD of ambient electronic music, "Score For Life.”

By 2001, John had twin boys and took himself off the active list. He sold t-shirts at The Gap, wrote promotional fluff for the Ontario premier and became a court support worker in criminal justice, giving him a unique perspective of the needs of young and adult offenders and youth at risk.

The unlikely epiphany was in 2008, when the local elementary school needed a musical director for its year-end talent show. Like many volunteer positions, it was a consistently thankless job. But something about DJ-ing for twelve-year old rappers and teaching fifth-graders mic technique stuck with him. John Copping continued as musical director right up until his sons finished sixth grade.

In 2014, John Copping relocated to Berlin to produce and perform the Cover Girl project—Deep House and Triphop re-imaginings of classic Soul, Motown and Funk records, accented with samples from original vinyl pressings. He scored video pieces for local Berlin artists and performed in small clubs...

...and stumbled on the work of El Sistema.

Intrigued by the concept of a "system" which lifts young people out of poverty with music, John Copping began observing El Sistema facilities firsthand, a process which took him halfway around the world. The result is Blackball, a fully electronic version of the El Sistema nucleo.

Since July of 2015, this unusual music education project has given young people in mixed-income Toronto communities hands-on access to synthesis, beat programming and sampling. In February of 2016, in cooperation with the Toronto Kiwanis Boys and Girls Clubs, young Blackball participants performed live and un-automated before their peers and family members.

To date, some 70 youth and children have taken part in the Blackball project. And there are more sites, more clients and more awe-inspiring electronic sounds yet to come. 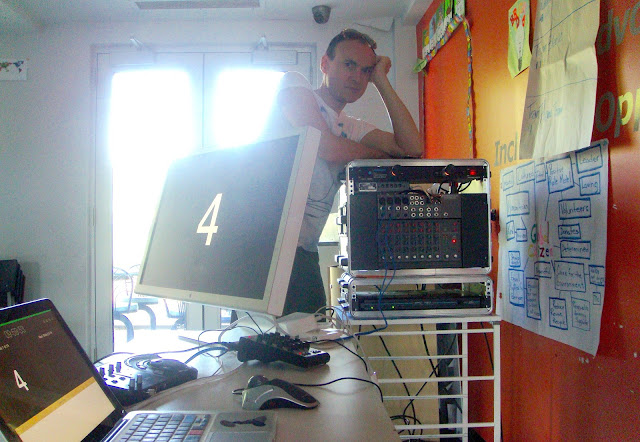 “John was a peer coach/mentor to his colleagues during the transition from analogue to digital recording. John is a motivated and enthusiastic individual, truly a pleasure to work with.” Danny Caon, Court Operations Supervisor, Ontario Ministry of the Attorney General

Email ThisBlogThis!Share to TwitterShare to FacebookShare to Pinterest
Location: Toronto, ON, Canada